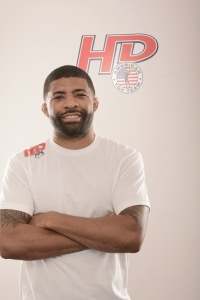 LC Davis grew up in the Kansas City area. He wrestled for Missouri Valley College, where he earned a bachelor’s degree in exercise science.

Davis made his MMA debut in 2006, defeating Nick Wright in VFC 12. His thriving professional MMA career led to him retiring from a steady job as a wrestling coach in Pratt College and moving to the Quad Cities to train under Pat Miletich at his Mixed Martial School. He was ranked in the top 10 in the Featherweight division for World Extreme Cagefighting (WEC) and has also fought under Affliction, Titan Fighting Championships, Kansas City Fighting Alliance and other promotions.

In early Spring 2014, Davis signed with Bellator MMA, in the Bantamweight division. He debuted on March 21, 2014, beating Tory Bogguess via guillotine choke in the first round, bringing his record to an impressive 21 wins and just 6 losses.

What our Members Say:

American Top Team HD is a complete gym.. Great coaches and trainers and a great facility and family of teammates and competitors.. I've had nothing but the best experience and results. 50 pounds in 6 … END_OF_DOCUMENT_TOKEN_TO_BE_REPLACED

Family atmosphere with world class coaches and training partners - an amazing team with something to offer anyone wanting to improve themselves! - Steven Graham … END_OF_DOCUMENT_TOKEN_TO_BE_REPLACED

I love how close knit and competitive it is here. It's competitive in a way that makes everyone want to reach their goals. I came here 3 years ago and I've lost between 50-70 pounds in no time at all. … END_OF_DOCUMENT_TOKEN_TO_BE_REPLACED

Stop in and check us out!